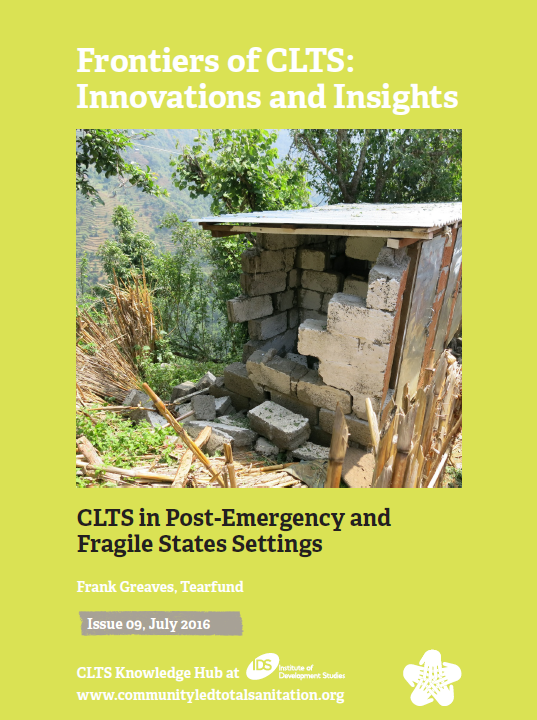 Frontiers of CLTS: Innovations and Insights - CLTS in Post-Emergency and Fragile States Settings

As  an  alternative,  CLTS  can  appear  fundamentally  mismatched  with  post-emergency  and  fragile  states  contexts:  the  core  principle  that  sanitation  hardware  should  not  be  subsidised  can  conflict  with  urgent  need,  and  with  what  some  will  view  as  a  contravention  to  the  right  of  human  assistance.  Affected  populations  have  often  lost  all  their  wealth,  and  are  traumatised,  physically  weak,  insecure,  and  at  the  point  of  greatest  dependency  on  the  aid  community.  Furthermore,  the  least  able  members  of  the  community  may  not  be  able  to  rely  on  help  from  others  when  their  community  structure  and  its  social  capital  have  been  devastated.  Yet  as  time  progresses,  priorities  and  human  capacities  change,  sanitation  itself  will  become  a  key  consideration  for  health  and  well-being,  and  conditions  for  CLTS  self-action  often  improve. Instead  of  attempting  to  categorise  learning  of  CLTS  applicability  under  set  types  of  disaster,  recent  studies  have  suggested  that  a  ‘typology  of  situations’  affecting  both  the  lives  of  people  caught  up  in  the  emergency,  and  the  overall  enabling  environment,  has  the  most  important  influence  on  whether  or  not  a  demand-led  sanitation  solution,  such  as  CLTS,  could  be  successfully  adopted. A simplified, broad typology is used to present the key learning points on the applicability of CLTS in three categories: displaced people living in camps, displaced people living in host communities, and people living in settled villages in conflict affected areas, or undergoing recovery/rehabilitation. Within  each  of  these  three  key  situation  typologies  there  will  be  sub-typologies  /  situations  which  will  influence  the  effectiveness  of  the  CLTS  approach.