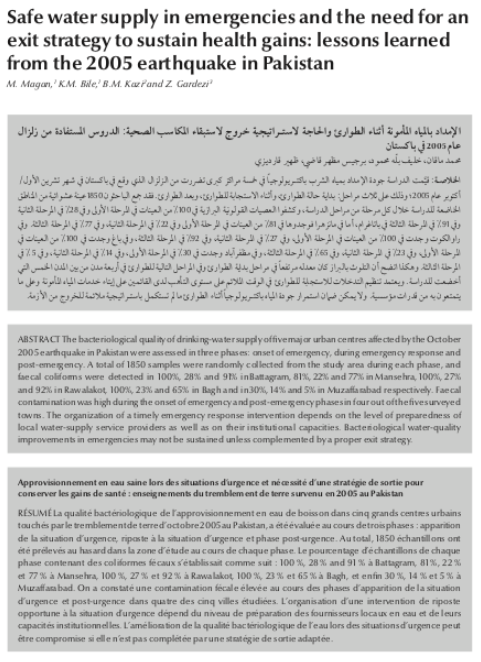 Safe water supply in emergencies and the need for an exit strategy to sustain health gains: lessons learned from the 2005 earthquake in Pakistan

The bacteriological quality of drinking-water supply of five major urban centres affected by the October 2005 earthquake in Pakistan were assessed in three phases: onset of emergency, during emergency response and post-emergency. A total of 1850 samples were randomly collected from the study area during each phase, and faecal coliforms were detected in 100%, 28% and 91% in Battagram, 81%, 22% and 77% in Mansehra, 100%, 27% and 92% in Rawalakot, 100%, 23% and 65% in Bagh and in 30%, 14% and 5% in Muzaffarabad respectively. Faecal contamination was high during the onset of emergency and post-emergency phases in four out of the five surveyed towns. The organization of a timely emergency response intervention depends on the level of preparedness of local water-supply service providers as well as on their institutional capacities. Bacteriological water-quality improvements in emergencies may not be sustained unless complemented by a proper exit strategy.