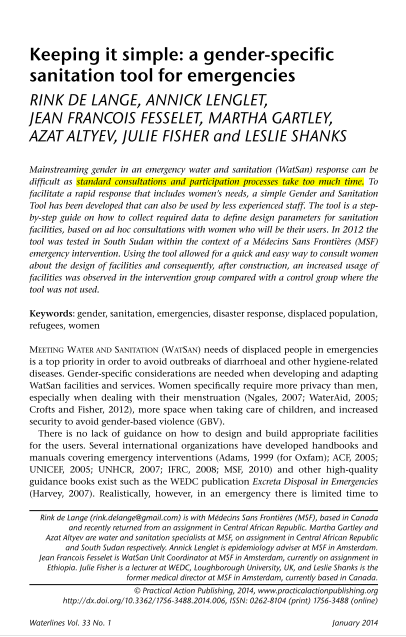 Keeping it simple: a gender-specific sanitation tool for emergencies

Mainstreaming gender in an emergency water and sanitation (WatSan) response can be difficult as standard consultations and participation processes take too much time. To facilitate a rapid response that includes women's needs, a simple Gender and Sanitation Tool has been developed that can also be used by less experienced staff. The tool is a step-by-step guide on how to collect required data to define design parameters for sanitation facilities, based on ad hoc consultations with women who will be their users. In 2012 the tool was tested in South Sudan within the context of a Médecins Sans Frontières (MSF) emergency intervention. Using the tool allowed for a quick and easy way to consult women about the design of facilities and consequently, after construction, an increased usage of facilities was observed in the intervention group compared with a control group where the tool was not used.